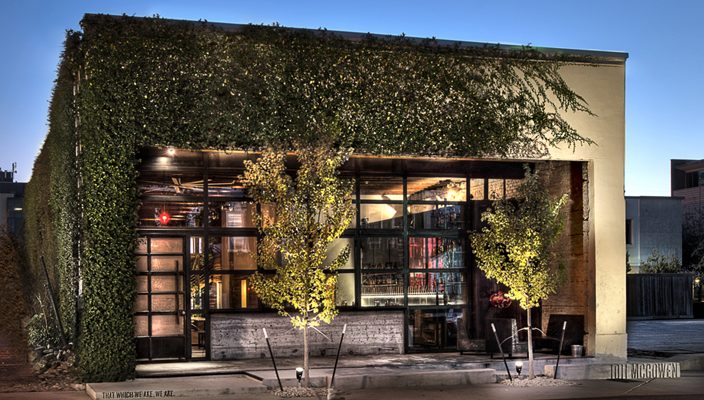 In 2016, I wrote about Mongoose versus Cobra, the Houston Midtown bar and its hand-built draught system, ambiance, and the 100-year-old building that it resides in. Now, four years later, Mongoose versus Cobra (MvsC) is evolving into the RED DWARF, a new concept that will continue to make 1011 McGowen a must-visit.

RED DWARF will debut on July 1 as a day-to-night DIY live music concept featuring a coffee shop, art, and music during the day, and transitioning into a full bar in the evenings.

“This was an opportunity to share the space for more hours a day and with many more people,” said Ian Rosenberg, owner of Mongoose versus Cobra.

The Auditorium Grocery Company was the original occupant of Mongoose versus Cobra’s current location. The 105-year-old building has served its community for over a century with local goods. Now, DIY live music and entertainment will be a part of the building’s next chapter.

“The goal of RED DWARF is to create and facilitate a welcoming space for musicians and artists to showcase their work with minimal hurdles in booking, promoting, and performing,” said Shan Pasha, RED DWARF’s booking manager, and co-owner.