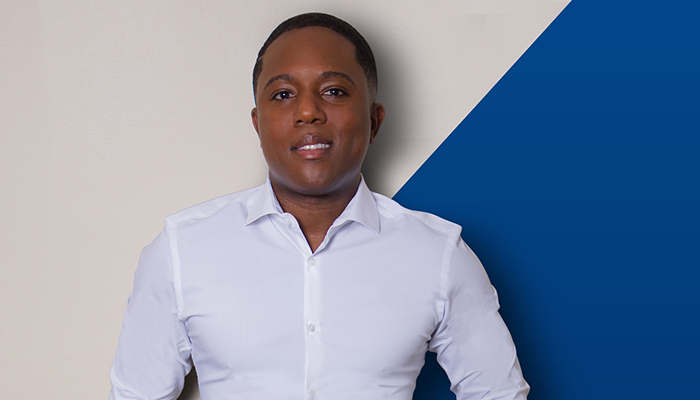 JMG founder and editor Jacquari Harris wins the Award of Distinction at the 2021 Communicator Awards for his feature article and interview with actors Lawrence Hilton-Jacobs and Alan Powell for the film Shooting Heroin. The win was for the category features-copy/writing for websites.

Released in 2020, Shooting Heroin follows Hilton-Jacobs (Edward) and Powell (Adam) as they fight to eliminate an opioid epidemic in their hometown of Whispering Pines, Penn. 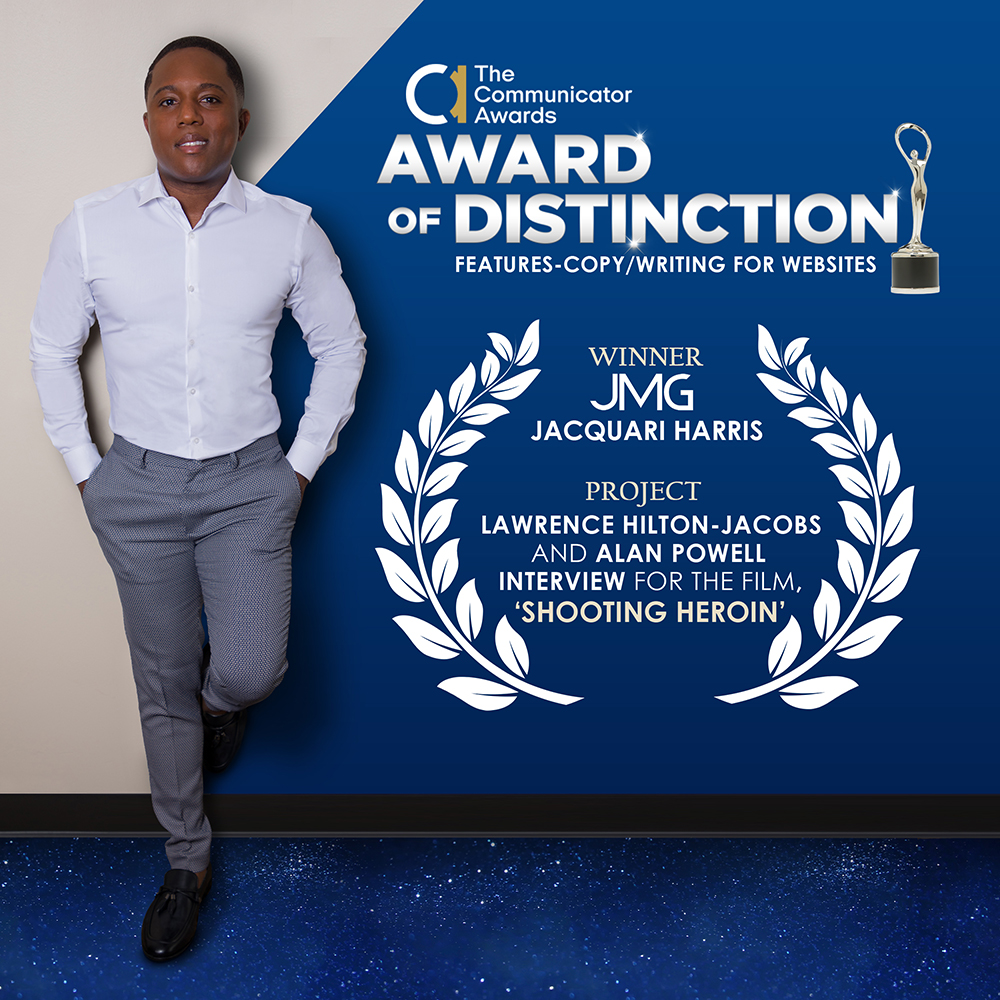 The Communicator Award is Harris’ second award win of the year. In May, he also won the Gold Award at the Hermes Creative Awards in the web writing/content category. The win was for his feature article and interview with Jennifer Lee-Pryor for the documentary I Am Richard Pryor. The documentary premiered during SXSW in 2019 and the film tells the story of Pryor’s life, from his childhood to his groundbreaking career as a comedian. Harris interviewed Lee-Pryor, one of the executive producers of the film, during the festival. Two years later, the Hermes Creative Awards would recognize Harris for his outstanding feature story and interview with Lee-Pryor. 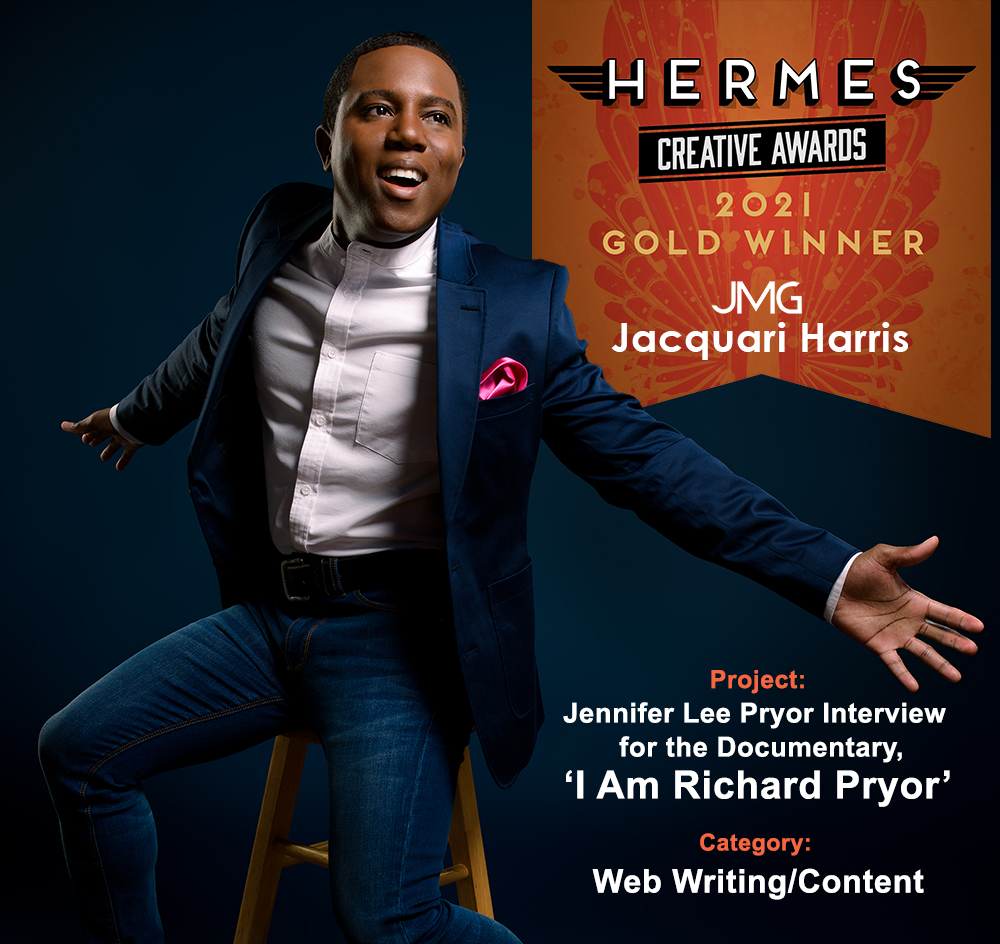 JMG and Harris sit alongside other recognizable brands who were named winners this year. PepsiCo, UFC and UnitedHealthcare won the Gold Award at the Hermes Creative Awards. For The Communicator Awards, Forbes and Amazon also won the Award of Distinction for their categories.

For nearly 12 years, Harris has interviewed high-profile names, which include Oscar, Grammy, and Emmy Award-winners. He has spoken with a diverse group of music artists, actors, and TV personalities that include Barry Jenkins, Kevin Hart, Kim Kardashian West, David Guetta, NE-YO, Ethan Hawke, RuPaul, The Chainsmokers, Erika Jayne, Black Eyed Peas, and Pharrell Williams, to name a few. All of Harris’ feature articles and interviews have been published through the JMG platforms that include JMG Magazine, JMGMags.com, and JMG Live! Music Lounge podcast.

Harris’ talents in marketing, digital media, and communications have led to JMG’s growth over the years with a new era that’s on the horizon.

“I’m very excited to have won both the Communicator Award and the Hermes Creative Award,” Harris said. “When I started JMG, I just wanted to write about music and entertainment. I did not know that publicists, record labels, and other agencies nationwide would gravitate to my work at this level. And now, I’ve won two awards, which is such a blessing. I’m developing a new JMG platform for my interviews and content that’s coming this fall. I can’t wait to share it with the world.”

About JMG
Houston-based JMG (JBH Media Group) is an award-winning digital media company that is shaping journalism and entertainment with accessible, engaging, and interactive content. Founded by Jacquari Harris, JMG has provided discerning adults with an authentic viewpoint on an ever-evolving culture of music, concerts, food, TV and films, sports, exclusive interviews, and pop culture. The JMG platforms include JMGMags.com, JMG Live! Music Lounge podcast, the JMG Daily e-mail blasts, and the print and digital editions of JMG Magazine (2009-2017). JMG develops content with broad consumer appeal, which has led to strategic marketing and advertising partnerships with local, regional and national brands.

About The Communicator Awards
The Communicator Awards is dedicated to recognizing excellence, effectiveness, and innovation across all areas of communication. It is the leading international awards program honoring talent in this highly competitive field. Founded nearly three decades ago, The Communicator Awards receives almost 5,000 entries from companies, agencies, studios, and boutique shops of all sizes, making it, globally, one of the largest award shows of its kind.