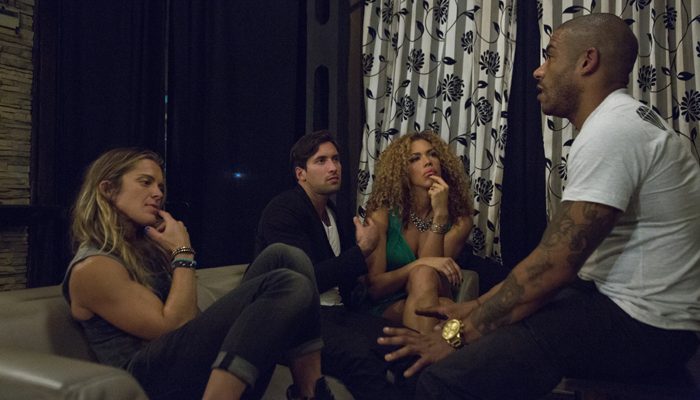 Each trainer specializes in different areas and they take their careers, health, and rigorous workout ethics to the absolute and most extreme degree of seriousness.

Romantic flings and bitter rivalries won’t stand in the way when climbing the mountain of success. With their reputation on the line and the fitness world evolving every second, the trainers have to be at the top of their game at all times because one slip-up could result in them falling behind.

Before the show premiered on Bravo on Sunday, December 6, I spoke with Courtney about the show and what fans can expect.

JH: Why do you think you’ve been successful as a trainer for so many years?
Courtney: Because I’m more than just a trainer. I’m more than an instructor. I’m an experience. Personally, I don’t pick any client. You’ve got to mesh well at a personal level. I know there are trainers that are just there for the money. For me, I don’t want to know what your name is, or if you’re this celebrity. People understand that I don’t just care about the money, but that I care about them. This industry is very competitive. Some people are just here for the money, but I’m here to help people. And that’s what this industry is supposed to be about and that’s why I came into the game. Trust me, I love money. I love a dollar bill. But I love people more than just money. So, that’s why I’ve been successful over the years. I’ve been here for 13 years. So, I’ve seen the kids come and go, but I’m still here. You know, I always listen. I’m not a know it all. I don’t know everything. Even though I’ve been in the industry for a very long time, I don’t know it all. But what I do know is how to motivate people. It’s all mental. It’s not just a body thing. It’s a spiritual thing.

JH: What was one of the most exciting things about shooting Work Out New York for you?
Courtney: What was fun about shooting this long, grueling, in the cold show with people I didn’t care for at times? It got me closer to people that I was already close with. Me and Holly have known each other for 13 years and it’s brought us even closer. Me and Layla, we were like BFFs. You know how you have the gays that have the girlfriends. I’m not that kinda guy. I like to hang with dudes. Layla is a dude. Layla is the coolest chick ever. So, it just brought my relationships even closer. That’s the best part of the show.

JH: What do you hope viewers take away from watching the show?
Courtney: I hope it creates a movement. For me personally, Jillian (Michaels) is great, Shaun T. is great, and I believe a lot of these other fitness people are great. They have changed lives. Michelle Obama changed the obesity rate from a mess to 43%. That’s creating a movement and that’s what I hope this does. I want to create a movement like Richard Simmons. Richard Simmons, that’s who I want to be. Why does it have to be so serious, or so intense or insane? Why can’t we have fun with it a little bit? I have a company called CPX, the Courtney Paul Experience, and I’m about to create a movement. Trust me, it’s on the way.

JH: What’s your favorite body part to work on?
Courtney: Legs, legs, legs, Because it’s seen at the beach, and at the pool. Yeah, arms are nice, your chest is nice, but whenever you step out of that pool and you have that bathing suit on and you got that ass and those legs. Now everybody likes some ass and some damn legs.

View the December 2015 Issue for the full Work Out New York article.