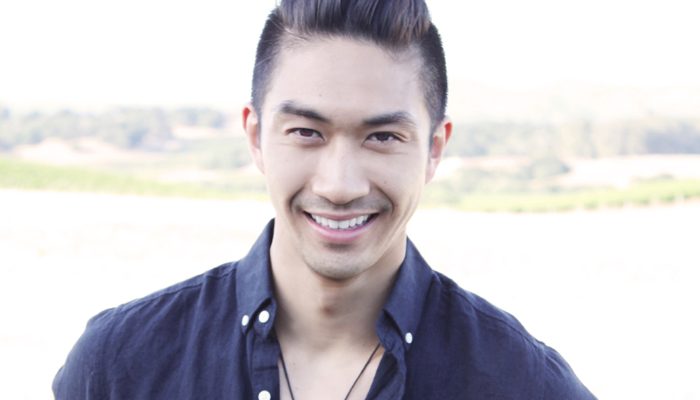 Chef Ronnie Woo Takes His Culinary Career to the Next Level

He’s funny, smart and knows how to make magic. In the kitchen, that is. Celebrity chef Ronnie Woo hit the airwaves this past summer with his unique new cooking show, Food To Get You Laid on the Logo channel. In each episode, Woo takes relationship building to the next level by showing intimidated cooks the right ingredients, foods and techniques that can mold a relationship from blasé to date-night fireworks.

As a former Wilhelmina and Ford model, Woo is no stranger to the spotlight. From gracing his physique in ad campaigns to serving as a private chef to stars such as Kathy Griffin and Holly Robinson Peete, Woo has been making his way through the entertainment industry for years, and he’s just getting started.

Recently, Woo spoke with me about his education, which includes the culinary program he took at Northwest Culinary Academy of Vancouver, psychology, his hit show and his upcoming cookbook.

JH: How did you get the opportunity to have your Food To Get You Laid cooking show on the Logo channel?
Ronnie: It’s a funny story. It’s a concept that I came up with a couple of years before I was presented with the idea. A friend of mine heard about the show and thought I would be perfect for it. I went in and I think it was pretty much a match made in heaven. Then we started working on it, developing it and it was a pretty quick process, to be honest with you. From start to finish, it took about one year, which is a pretty quick turnaround time. We actually shot it in June and it started airing in August. So, that’s how it all came together.

Was the show called Food To Get You Laid before you came on board, or was the name created after the producers met you?
The show was actually called Food To Get You Laid and the funny thing is that it was a working title and then the network decided to keep it. It’s a little provocative. But the show is about building shared experiences with who you’re dating, who you’re married to, or someone you just started dating. It’s about slowing down and it brings things back to what it’s like when people first started dating and cultivating memories. It’s having a meal together and talking opposed to texting and how everyone communicates now. It’s never face to face, so it’s really about slowing down with your busy life and cooking a meal, and putting an effort into something such as a home-cooked dinner.

Well, that leads me to my next question. What would you like for people to take away from the show?
Well there’s really two sides to it. I would love for them to get that cooking is approachable. It’s something you can do for your loved one. It’s not about how the meal turns out, because I’m obviously there with them, so the meal is going to turn out good. But part of the message is that you get in there and do something. Lord knows I’ve been there. It’s the memories you make with your girlfriend or boyfriend. Just getting into the kitchen and trying and not being scared about it. The other side is just about putting in the effort into your relationship, as well. So, it’s kind of twofold because there’s the cooking part, where you learn some tips and fun recipes. The other part is just about taking time to make memories with your partner.

You have a bachelor’s degree in psychology, among other degrees. How has your education helped you be become a better chef than, say, someone without a psychology background?
That’s a really great question. It’s given me a different angle on how I approach food, how I craft menus and things like that. When you dig deeper into someone’s psyche, you ask them questions. Sometimes when people are planning a party for their spouse or someone they love, a mother or father, it’s about incorporating little details that they might not have thought about. Thinking about a deeper meaning with food as opposed to just, “What do you think is delicious?” For me, it’s all about creating memories, and food is a good way to do that. Then as far as my business degree, you can’t go wrong with a business degree. Being a chef is a business. So, it helps me in being a little more business savvy.

What is it about cooking that makes you so passionate about it?
That’s a great question and an easy question to answer, as well. I’m a very creative person, and the great thing about food is being a chef and being really creative. Food is subjective and everyone has their own style of cooking and your tried-and-true techniques. But you get to be creative and express yourself through food, and that’s why I like it. It’s not a 9-to-5 job. There are long hours, and it’s a lot of work and a lot of sacrifice. It’s always changing and it’s always dynamic. So, it allows me to consistently be stimulated in different ways.

I know that you’re working on a cookbook. What can you tell me about it?
It’s still in the very early stages. Cookbooks take a long time to make. What I can tell you is that there will be themes of relationships and dating in it. So, it’s not going to be your standard cookbook with recipes. There’s going to be a deep element of psychology in it with relationships, romance and love. It will be cool and different unlike anything that’s on the shelves right now.