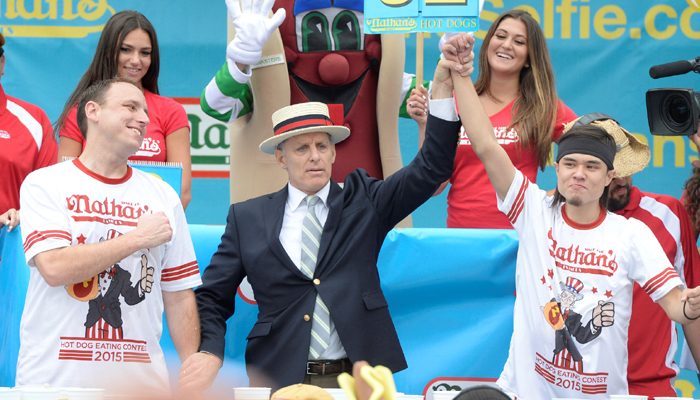 Long gone are the days of the simple pie-eating contests, where guys would compete to impress their friends, neighbors and onlookers at the county fair. Now, we have Major League Eating with contestants eating their way to glory with ribs, pancakes and hot dogs, all for big bucks and a championship title.

On Sunday, May 15, at the 9th Annual Niko Niko’s World Gyro-Eating Championship, Houston finds itself in the mix of an ultimate battle between Major League Eating’s top-ranked eater, Matt Stonie, and Joey Chestnut, his biggest rival to date. The two will go head-to-head to see who can down the most Niko Niko gyros in 10 minutes. The two competed against each other in 2015, with Stonie devouring his way to the top and Chestnut coming in second place.

However, with 11 years of competitive eating under his belt, Chestnut sees victory this year and has been preparing for the competition.

“I’ll do a practice contest, then recover and then do another practice,” Chestnut said. “It’s mostly making my body get used to taking in a crazy amount of food and getting comfortable digesting it. I’ll do a practice every third or fourth day, depending on how my body recovers and how I feel. Every time I practice, I build a new tolerance.”

But Stonie is no chump. He became the champion because of his dedication and love for the sport. So, he knows how to train and what sets him apart from other professional eaters.

“I’m not a huge guy. A lot of the competitors are like 6 foot, and have big torsos,” Stonie said. “I’m 5-foot-8, a modest size. But I feel like I work really hard at it. I took a break from college just to really focus on making these appearances, training and trying to win these contests. I’d be lying if I said there wasn’t some sort of natural ability with having a larger, more elastic stomach. “

“I do contests all the time,” Stonie said. “I’m winning money here and there, so I’m saving it up. I’m not blowing it. My food bill is high per se. But it’s a $2,500 first place, so it’s a good amount of money and I’m making this my full-time job and trying to be smart with it.”

With the world of Major League Eating watching, it all goes down this Sunday at 2 p.m. when Stonie and Chestnut face off. The Niko Niko’s World Gyro-Eating Championship is part of Houston’s 21st Annual Greek Festival, and you can get more details at houstongreekfest.com.

Subscribe here to JMG for the latest in music, fashion, food and entertainment.